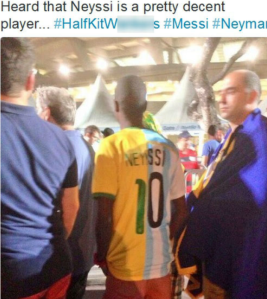 A wind – up? An expression of dual identity? Or an expression of the impact of the global football market?
Many ridicule such an image, of a ‘football fan’ sporting a shirt with two club emblems on the chest, however you may be more alike than first thought.
How many people can truly say now that they support their local team? How many people even support their regional, or indeed their national team?
There is an ever increasing number of football fans supporting teams who occupy Europe, predominantely teams from Europes BIG FIVE, notably in Germany, Spain, Italy, France and England.
Mass media has allowed us to be consumed by football events, heroes and villians. Everyday we are emerged in a spectacle of footballing prowess, and those teams with the greatest amount of money and the greatest amount of power possess the loudest voice in our social world. It is therefore probable to assume that football is no longer as community based and tribal as it once was. Globalisation and immigration has been a huge factor in this also.
Is this a good thing?
Many people agree, and feel positively about getting away from footballs ‘tribal’ elements. Possibly believing it will alleviate violence, and ethinic difference.
Is it a bad thing?
Well it is changing the culture of the game. Fans are now involving themselves in the business of football like never before, and are being commodified by the vast media market. This goes against the age old tradition of being ‘born’ a fan which is charaterised by common footballing tales such as ‘cut me and i’ll bleed (insert team colours)’, ‘my Dad was a (insert team name) fan, so I am’ or ‘I was born here, so I support (insert team name)’.
Traditional fans don’t like this commodification of football fans, and more importantly they don’t like that “fans” are buying into it. Many struggle with the concept of having a ‘second team’. To many it’s unthinkable, but in the modern world it’s ordinary.
IMO.
I would love to live in a world without sky sports. I would love to have seen an international match with a minimum of 100,000 people standing under one roof watching the sport I love (From 1906 – 1914 Scotland v England managed this feat: never less than 100,000 attendance during this time).
Alas, these are changed days and we live in the age of digital media. However, I must side with the traditionalists. With dwindelling numbers at football grounds, and complete lack of local and national talent in the United Kingdom I only worry that collective identities soon become extinct. Of course football must celebrate multiculture diversity, which football has aspired to since the Bosman ruling (1995), but it should never lose sight of local and regional pride and identity.
All that from one kit, eh?
PLEASE LEAVE COMMENTS AND THOUGHTS BELOW.
http://www.bbc.co.uk/news/blogs-trending-34714661

SPORTS HISTORY MADE IN ITALY!! 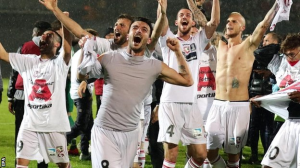 A small town club called Capri FC 1909, formed in 2002, have gained promotion to Italy’s premier league, Serie A, over the course of 5 seasons.

The club was formed from the ruins of the original which was plagued with bankruptcy and financial mismanagement.

In the year 2010 the club played its football in the Italian fifth division to a capacity stadium of 4,144 which may cause the club some difficulties next season as Serie A rules state that a club must have a minimum capacity of 20,000.

Hopefully, special exemptions will be made in honour of this remarkable achievement.

At the end of the 2009-10 season, due to the numbers of teams in financial difficulty, the club was admitted into Lega Pro Seconda Divisione (Division 4).

In 2011, the club obtained its promotion to the Lega Pro Prima Divisione (Division 3).

Then in 2013, the club made further progressions to Seria B (Division 2). This of course was the clubs third promotion in just four seasons.

On April 28th 2015 the club reached the holy grail of Italian football and gained promotion to the Serie A where they will play the likes of Roma, Inter Milan and Juventus. Carpi confirmed their place in Serie A with four games remaining of the season after a goalless draw against Bari last night.

Capri has a relatively small budget, and a payroll that fails to exceed 3 million euros making what they have achieved, something of a miracle.

Despite this high achievement, manager Cristiano Giuntoli insists that the clubs philosophy will not change; Carpi will continue to focus on youth players, and will engage fans by utilizing home – grown players.