Gerrard spent 17 years at Liverpool, making 710 appearances, scoring 186 goals and winning 9 trophies for the Reds. He ranks fourth in the table for most capped England players with 114 appearances.

The testimonies and career highlights have been all over social media, and we can do nothing but reminisce a fantastic career in football, as one of the greatest leaders on and off the field and one of the best, if not the best, midfielders of the last century retires from the game.

No one will forget that Steven Gerrard FA Cup final against West Ham or his sizzling, “yaaa beauty!”  strike against Olympiakos in the Champions League or indeed his hattrick against Everton in 2012 or the famous comeback in the Champions League final which resulted in the young skipper lifting old big ears for Liverpool’s fifth European Cup success.

There are many phenomenal moments in Stevie’s career, but also some rather car crash episodes. The slip against Chelsea is his most recent catastrophic error which cost Liverpool a long awaited premier league trophy. His 47 second red card also springs to mind in the epilogue of Stevie’s worst moments. But there can be no doubt that the positives far out way the negatives.

A wonderful player and ‘the last of the dinosaurs’ with a style of football embodied by Wimbledon’s crazy gang, it is with a heavy heart that we must say goodbye to Stevie G.

Here is the first installment of our five-part special which pays homage to one of the best midfielders we have ever seen. A player who symbolized the old blood and thunder style of the British game, someone who time and time again came up with the goods. An iconic figure of the 21st Century, and one of the most decorated sports men who ever lived.

French man, Gerard Houllier would be the one to give Stevie G his chance. Gerrard once described Houllier as “one of the nicest men in football”. He has cited the French man as a source of calmness on the day of his debut.

Gerrard didn’t see much action that day however he has since recalled a “safe touch” on the ball, a pass or two and a terrible cross that almost “sailed over the Centenary Stand”. Paul Ince was least delighted with Gerrard after this incident. 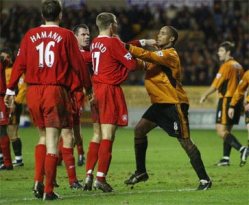 In the early stages of his career, the young Gerrard was given the tough task of filling in for injured skipper Jamie Redknapp. In his first season as a red, Gerrard made 13 appearances but has admitted that he struggled out of position and was plagued by nerves.

A special moment for Gerrard was his first Liverpool goal. On 5th December 1999 against Sheffield Wednesday at Anfield Stevie went on a mazy run, he takes it past two then slots the ball into the bottom left hand corner before running to the fans and sliding on his stomach to celebrate what would be the first of many. Liverpool eventually won the game 4 – 1.

At this time, Gerrard had to watch on as the rivalry between Alex Ferguson (Manchester United) and Arsene Wenger (Arsenal) grew in intensity. Both teams fought tenaciously over the league, but it was Manchester United who enjoyed most of the spoils. In Gerrard’s debut season, he watched on as the Red Devils completed a unique treble by winning the Premier League, FA Cup and Champions League, in that famous victory in Barcelona.

Gerard had to bide his time, and his first trophy came in February 2001 beating Birmingham City 5 – 4 on penalties, after a 1 – 1 draw, in the Football League Cup Final at the Millennium Stadium in Cardiff. A couple of months later in May, Gerrard would again lift silverware. This time he lifted the FA Cup after beating Arsenal 2 – 1 over the 90 minutes. Again, the stage of Gerrard’s silverware success was the Millennium Stadium in Wales. Michael Owen, a great friend of Gerrard’s, was awarded man of the match after his 2 goals in the last 10 minutes of the match sealed the deal, and brought the trophy back to Anfield. Four days after lifting the FA Cup, Gerrard would play in his first European Final….but we’ll get to that a bit later.

The early stages were bitter sweet for Gerrard. He had very few starts, relatively few appearances and a Merseyside derby to forget however there were glimmers of hope and his silverware success offered a glimpse of what was to come.

END OF PART ONE. 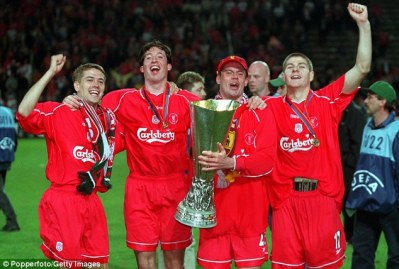